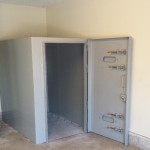 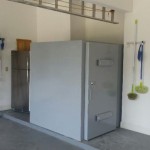 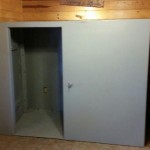 Your Rowlett Safe Room can protect you from a Tornado. At Safe Rooms US we install Safe Rooms in the Dallas, Fort Worth, and Rowlett area. Our Safe Room design has passed the Texas Test Impact Test and meet/exceed FEMA guidelines for an EF5 Tornado.

On Saturday 12/27/2015 Rowlett Texas was hit by a tornado and 23 people were injured after a tornado hit the city Saturday, leaving “catastrophic” damage.

“In the light of the day, we can now begin to see the impact this storm has had, and it is nothing short of catastrophic,” Funderburk said.

As of the next day damage assessments of 513 homes found 80 totally destroyed, 187 had major damage and 155 had minor damage. Nearly 6,000 people had no power.

The tornado landed in Ovilla and Desoto. Then it struck portions of Midlothian, Waxahachie, Glenn Heights.

Mid-Way Regional Airport clocked a wind gust of 105 mph between 5:55 and 6:15 p.m. The airport is halfway between Midlothian and Waxahachie, which just 23 miles south of Dallas.

The Weather Channel showed a live video of a cone-shaped tornado near Sunnyvale Texas.  It began at 6:46 p.m. The long-track tornado traveled north. Hit the southeast corner of Garland.  Four deaths occurred in Garland, and then it struck Rowlett. Then the tornado crossed parts of Rockwall and Collin counties. It traveled near Farmersville and caused major damage there also.